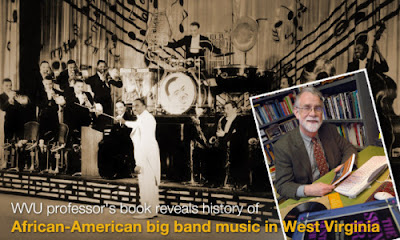 Legend has it that the Big Band or “Swing” Era in the United States began in 1935 at the Palomar Ballroom in Los Angeles when Benny Goodman and his orchestra began playing exciting “hot” new jazz and the jitterbug appeared as the new dance craze.

But according to West Virginia University music history professor Christopher Wilkinson’s new book, “Big Band Jazz in Black West Virginia, 1930-1942,” for black Mountaineers, the Big Band Era actually began almost a year earlier—in September 1934—at the National Guard Armory in Fairmont, where a black audience of 700 people danced to the music of African-American bandleader Jimmie Lunceford.
Wilkinson’s research shows that West Virginia’s unique economic conditions in the 1930s and early 1940s provided the foundation for an extraordinary musical culture in the coal mining areas of the state.

“No scholars studied this musical culture until now. This is new research,” Wilkinson said. “To many West Virginians, this may seem utterly unimaginable, given their understanding of the state’s musical traditions, but among African Americans living in the state, this was once common knowledge.”

Wilkinson specializes in the history of African-American music with particular attention to jazz. While researching another project, he listened to a recorded interview with New Orleans saxophonist Herb Hall, who traveled with big bands during the 1930s.

During the interview, Hall observed that: “All the bands were goin’ through West Virginia in those days, because the mines were in operation and everyone was employed.”

Surprised and intrigued, Wilkinson began pursuing the implications of Hall’s statement.
He researched the bands in old issues of The Pittsburgh Courier, one of two or three national African American newspapers of the time, as well as in other sources.

Before long, his research turned up a network of African-American entrepreneurs in West Virginia in the 1930s—with connections to a booking agent in New York—who organized the appearances by the big bands, which in those days were touring by bus throughout the country.

“The dances in West Virginia usually took place at National Guard armories, the gyms of black high schools or other rented spaces,” Wilkinson said. “They were segregated, but if on occasion a popular band came to play for blacks, whites would buy tickets to sit in the balcony and watch.

“And when the same African American bands played for the white audiences, the blacks watched from the balcony.”

Big Bands In The Coalfields

In the southern part of the state, the bands played mostly in Beckley, Bluefield, Charleston, Huntington, and less often, Welch and Williamson.

In the north, many of the dances took place in Morgantown and Clarksburg, but mostly in Fairmont because it was in the center of the northern (“Fairmont”) coalfield and had the largest black population of any town in that region.

The bands that played in the north also attracted fans from the eastern Panhandle of West Virginia, as well as Cumberland, Md., and Uniontown and Connellsville in Pennsylvania.

“Audiences in these areas had to undertake some serious mountain driving to attend the dances. Obviously, there were no interstate highways at that time, and it took several hours to drive one way,” Wilkinson said.
During the early 1930s, most of the bands that visited the Mountain State were “territory bands” that came from as far south as Florida, as far west as Texas and as far east as New York.

“Up until that time, the music scene in West Virginia was not very different from that of other states in the region,” Wilkinson said. “But in 1934, an unmistakable transformation occurred.

“Big-name bands from New York City—bands which had a national following—began to take notice of West Virginia’s improved economic circumstances, and the surge of interest in public dances was dramatic.

“For the next few years, these name bands played their way through the heart of the West Virginia coalfields by means of three, four or even five engagements on consecutive nights.

“It appears that local entrepreneurs were confident of attracting large crowds of dancers to successive engagements,” he said.

These big name bands included those led by Cab Calloway, Andy Kirk, Chick Webb,
and Don Redman, a native of Piedmont, W.Va., who by the 1930s was based in New York. Duke Ellington played three times in West Virginia: once in Fairmont in April, 1934, and twice in Charleston, in March 1935 and on Christmas Eve 1937.

Jimmie Lunceford And His Orchestra

There were many big-name bands that played in West Virginia, but Jimmie Lunceford’s orchestra played here more than any of the others—a total of 19 times between Sept. 1934 and May 1942. It was one of the most popular black dance bands of the 1930s and 40s, and had been the house band for the Cotton Club in Harlem, following in the footsteps of Ellington and Calloway.

When Lunceford debuted in Fairmont in September 1934, fans came from Cumberland, Piedmont, Weston, Elkins, Morgantown, Clarksburg and Uniontown. Some of the repertory performed in Fairmont that night was no doubt music Lunceford’s band had previously performed to great acclaim at the Cotton Club, including the songs: “White Heat,” “Jazznocracy” (Lunceford’s theme song),”Breakfast Ball,” “Here Goes a Fool,” “Miss Otis Regrets,” “Unsophisticated Sue” and “Star Dust.” It also played its own arrangements of Ellington’s “Mood Indigo” and “Sophisticated Lady.”

“Lunceford’s band was different because it played and recorded a varied repertory that ranged from ‘sweet’ to hot jazz numbers,” Wilkinson said. “It included music for dancing, sentimental ballads, novelty tunes, and virtuoso ‘flag wavers.’”

Black mountaineers knew Lunceford’s music long before he appeared in Fairmont because they heard his band on the radio. The same would be true for many of the other touring dance bands.
“The impact of radio was profound,” Wilkinson said. “Electricity was widely available in the coalfields because it was essential to operate the mines.

“Seventy percent of the houses in company towns had electricity by 1927, when in much of the rest of the state electrification was rare or nonexistent. This made the coalfields cosmopolitan, and linked to the national culture.”

“The dances were organized by members of the black middle class, but by far the largest proportion of the audience members were miners and their families—the working class,” Wilkinson said.

Why did so many black bands make it a point to tour the Mountain State?

“The simple answer is that black West Virginians enjoyed a degree of prosperity little known elsewhere in African America, and this was due to industrial policies associated with Roosevelt’s New Deal, which regulated and stabilized the coal industry,” Wilkinson said.

In 1933, the coal operators of the state and the United Mine Workers of America agreed to abide by the terms of the federal Bituminous Coal Code, which established uniform prices for all grades of coal and also allowed miners to organize and set union contracts.

“The United Mine Workers of America then shot around the coalfields and they were racially integrated,” Wilkinson said.

“Since the Union was racially integrated and contracts applied to all union members, African-American miners in the state received the same pay as whites. Additionally, thanks to the stabilizing of the industry, wages began to increase dramatically after 1933. Miners had money to spend, and many chose to spend some of it going to dances.

“Another consequence was that black miners in West Virginia could afford to pay touring dance bands more per engagement than did African American dancers—and European American ones, for that matter—elsewhere in the region,” he said.

End Of An Era

Ironically, it was also the mining industry that brought the glory days of the big bands in West Virginia to an end by the early 1940s.

That’s when a machine called the Joy Loader replaced the individual miners shoveling coal and black miners were the first ones fired.

“Also, when World War II came, it made it impossible for the bands to tour and the Swing Era for African Americans came to a halt,” Wilkinson said.
“Gas was rationed, the bands couldn’t get new tires for their buses, and there was no metal for new instruments.

“By the summer of 1942 the lively musical culture of big band jazz and dance music in black West Virginia came to an end,” he said.

Looking back on this period, Wilkinson noted the importance of those dances, each attended by hundreds of people. These social occasions brought the black community together, provided opportunities to socialize with people who might live at some distance from one another, and enabled everyone to hear and dance to some of the greatest bands of the Swing Era.

Wilkinson’s research demonstrates that the musical life of the Mountain State back then was varied.
“It was not just fiddles, banjos, and dulcimers, as many people believe,” he said. “It also included trumpets, saxophones, pianos, trombones and drums as well!”
-WVU-