Thanks To Bro. Chris Popa The Founder And Creator Of The Big Band Library http://www.bigbandlibrary.com For This Great Buzz Of An Article!!!

Go To the Official Website http://www.jimmieluncefordjam.blogspot.com to find out more and how you can support this historical undertaking!!!
~Bro. Ron a.k.a. R2C2H2 Tha Artivist 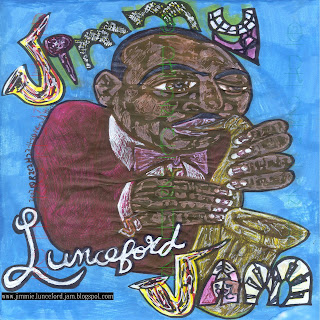 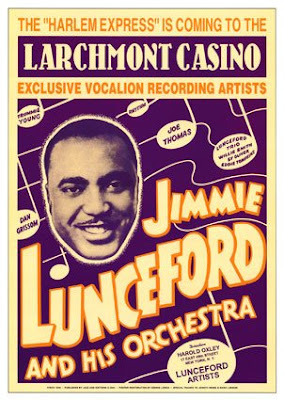 Rhythm Is (Still) Their Business
Jimmie Lunceford [ above ] died in 1947, but his music lives on thanks to several current endeavors. First is a resurrected Jimmie Lunceford Legacy Orchestra; surprisingly, it's not in the United States, but, rather, in Holland. Another is a new CD by the Orchestra, "Rhythm Is Our Business," made up of 16 tracks. And third is a plan to hold a yearly Lunceford celebration in his hometown of Memphis, Tennessee.

According to publicity, "It was only a chance discovery of the original Lunceford band book with charts and notations in 1999, gathering dust in the Smithsonian library, that inspired Dutch saxophonist and band-leader Robert Veen to embark on an epic 8 year journey to resurrect the JLO, to record and release the first 'new' Lunceford recordings in 60 years."
Though the reformed band first appeared two years ago at the North Sea Jazz Festival held in The Netherlands, their activity is just now taking off. For example, in February 2007, they performed at the Paradiso Club in Amsterdam, and, last month, presented a three-hour show, "A Night At the Cotton Club," at the 10th annual Jazz Op Tilt Festival in Giessenburg. Additional details are at the webpage myspace.com/jimmieluncefordlegacyorchestra.

Meanwhile, in Memphis, sponsors were being sought for a three-day celebration, "The Jimmie Lunceford Jamboree Festival," to take place October 19th through the 21st at various locations around the city.

According to organizer Ronald Herd II, planned events include an opening symposium at Manassas High School, discussing Lunceford's life and career; a tribute concert; and a wreath-laying ceremony at Lunceford's gravesite in Elmwood Cemetery. For more information, view the website jimmieluncefordjam.blogspot.com.

It was stated that the purpose of the Festival is "To Honor And Bring Awareness To The Forgotten And Impressive Legacy And Achievements Of Jimmie Lunceford," credited, among other things, for being "The First High School Band Orchestra Leader/Conductor In The History Of The Memphis City Schools."

Author Eddy Determeyer, in his recent Lunceford biography, Rhythm Is Our Business (Ann Arbor, MI: The University of Michigan Press, 2006), wrote that "In 1927, Lunceford was one of the world's first, if not the first to teach jazz at a school."

Lunceford had been hired that year to teach English, Spanish, music, and athletics at Manassas High School in Memphis. He organized a student band there, called The Chickasaw Syncopators, which took its name from the African-American neighborhood where most of the students lived.
"Jimmie Lunceford taught his students jazz history, dance band harmony, dynamics and blending, the use of mutes, how to build a solo, and rhythm," Determeyer explained. "He used a Victrola to have them analyze how other, well-established dance orchestras performed."
Under Lunceford's leadership, The Chickasaw Syncopators turned professional and, by 1933, were billed as his own orchestra.

To Read The Big Band Library Newsletter In Its Entirety Go To The Following Link:
http://www.bigbandlibrary.com/bigbandnewsoctober2007.html
Posted by tha artivist at 12:50 PM No comments:

Tha Artivist Says: Although The Host Doesn't Pronounce The Great Jimmie Lunceford's Name Correctly (He Calls Him Jimmie Lansford) This Podcast Is Still Very Informative And Enjoyable Which Equals Edutaining!!! Please Take A Listen For Yourself:
http://channel1.radionostalgia.libsyn.com/index.php?post_id=38009

Posted by tha artivist at 3:03 AM No comments:

A True Fan Of Jimmie Lunceford's Wrote:
The Jimmie Lunceford Orch. playing Nagasaki. My guess is that this was probably filmed around 1934. The middle trumpeter is Sy Oliver, one of the greatest jazz arrangers of all time. The talent here is extraordinary, Where can you find players today who can match those in this band?

Tha Artivist Says: This is another reason why everyone should be supporting the first annual Jimmie Lunceford Jamboree Festival...Get off the sidelines of history and get in the game today!!!

Posted by tha artivist at 10:04 PM No comments:

"Jimmie Lunceford Has The Best Of All Bands. Duke [Ellington] Is Great, [Count] Basie Is Remarkable, But Lunceford Tops Them Both."
-- Legendary Swing Band Leader Glenn Miller

"Jimmy Lunceford Was Buried Here In Memphis. The Spot He Occupies Should Have Something Of A Special Significance. ...He Took A Group Of Relatively Unsophisticated Memphis Colored Boys And Welded Them Into An Organization Which Scaled The Heights Of Musical Eminence. ... He Presented Something New In The Way Of Musical Presentations By Negro Orchestras."
--Legendary Memphis Educator And Syndicated Columnist Nat D. Williams
Artasic & Jazzlicious Greetings To All,

copyrighted image by r2c2h2
This newsletter is dedicated to bringing awareness about the first annual Jimmie Lunceford Jamboree Festival which will take place over Three Days ( Oct. 19-21, 2007 ) in Memphis, Tn, an important distribution center of culture and commerce for the nation and the world…

This is a true grassroots effort and we need all the support that we can get whether it be financial, spiritual, charitable as well as all the volunteerism possible to make this a successful event which will make an impact and immeasurable difference in a countless number of lives…If you are interested in being part of something historic and positive please continue to read this newsletter to learn of ways to support this effort…Remember there is strength in numbers and we must be the change we want to see in the world because we are the leaders that we are looking for…

I actually just created a website in honor of the event: http://www.jimmieluncefordjam.blogspot.com
The Purpose Of The Jimmie Lunceford Jamboree Festival:

Unfortunately Jimmie Lunceford (after dying under mysterious circumstances on July 12, 1947 in Seaside, Oregon) has been forgotten by many in the Memphis Community for 60 years and counting…

The purpose of this event is to bring awareness about Jimmie Lunceford and to instill community pride in the achievements and accomplishments of a native Memphian who never forgot Memphis…Jimmie Lunceford’s remains are interred at the famous Elmwood Cemetery along with his wonderful legacy. Hopefully three days in October and many years to come we plan to change that.

The Three Day Celebration Which Will Take Place Oct. 19-21, 2007 Includes:
1.) Date: 10/19/07 Venue: Manassas High School Time: 9am-12pm~ An opening symposium about the life and legacy of Jimmie Lunceford at his old stomping grounds…

Panelists will include people who knew Jimmie Lunceford personally, renowned music experts, and legendary musical figures who benefited from the example and music of Jimmie Lunceford…This will be broadcast live throughout the country and world via internet.

6.) Debut Of The Jimmie Lunceford Scholars Fund Awarded To Top Students Pursuing A Career In Music And Music Education

7.) Debut Of The Jimmie Lunceford Legacy Award Which Is A Lifetime Achievement Award Dedicated To Those Who Tirelessly Devote Themselves To The Practice And Promotion Of Jazz Music And History 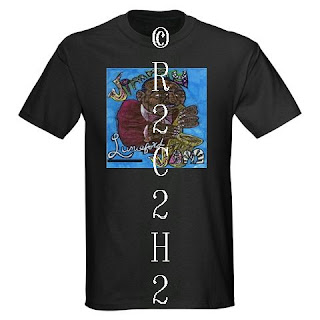 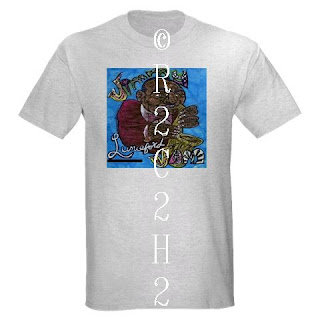 (note: r2c2h2 copyright not part of actual shirt and design)

Please Click Here To Learn How To Order And Buy A Shirt.

2.) Become An Official Sponsor Of The Jimmie Lunceford Jamboree Festival.

Put your money where our Paypal Account is and we will do the rest...People who donate a certain amount for sponsorship will have access to advertisement opportunities
with us…To Learn More About This Opportunity Click Here.
3.) Donate Your Spare Change To Our Paypal Account.
There is no such thing as small change in this effort for change...If you have a penny or more please feel free to donate to this cause…Please Send Your "Change For Change" To Our Paypal Account By Clicking Here.

4.) Volunteer Your Time And Talents To Make This Event 60 Years In The Making A Truly Extraordinary One.
If you have a talent(s) or a service that would benefit the festival please feel free to contact us through e-mail jimmie.lunceford.jam @gmail.com or call us anytime @ 901-299-4355…All good vibrations are welcomed!!!

5.) Spread The Word To Your Networks And Beyond…

We need to get the word out about this event…Word of mouth, all types of media attention is welcomed…The more people know the more people can support…Remember the official website is http://www.jimmieluncefordjam.blogspot.com

All That Jazz With Some Love,

*Important~Please Vote For The Following 2 R2C2H2 Websites To Win The 2008 Black Web Awards...Just Follow The Links And Vote As Many Times As You Want!!!