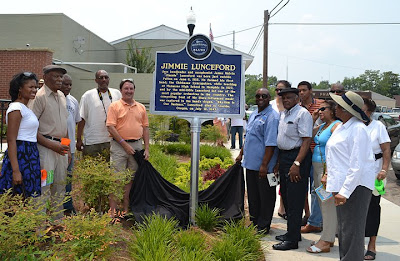 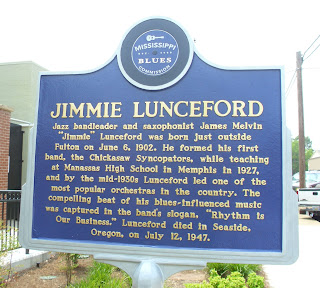 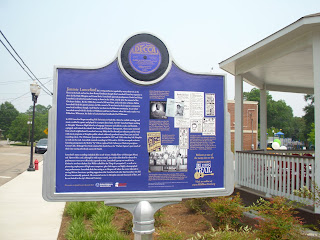 Tha Artivist Sends His Jazznocratic Regards To The Town Of Fulton & Itawamba County, MS, For Job Well Done In Honoring Jimmie Lunceford!!!
On June 6, 1902, A Music Prophet Was Born, But On June 4, 2011 The Prophet Finally Got The Honor & Respect He Was Due From His Hometown That Eluded Him In Life…Jimmie Lunceford Was Finally Immortalized In The Land Of His Birth On The Mississippi Blues Trail…
I had the honor of attending this heartwarming ceremony or maybe I was warm because it was 100 degrees outside in the Delta Sun which seemed to shine bright and eternal like Jimmie Lunceford’s genius…Anyways I truly felt like a long lost cousin..I was truly welcomed by the southern hospitality, ice cold old timey country lemonade and the generosity of the town folks…It was truly beautiful to see a community come together to honor a native son who gave the world such timeless artistic gifts…I felt truly empowered by the community’s enthusiasm, to me their unity represented the essence of what Jimmie Lunceford was truly all about: uniting and empowering a community of decent people for the common good that benefits the whole of huemanity… 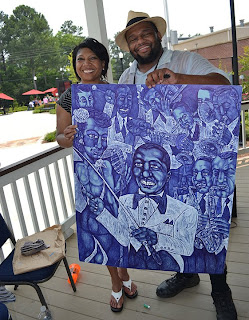 I truly enjoyed how beautiful poetess extraordinaire Sis. Patricia Neely-Dorsey put moving lyrics to Lunceford’s sonic sound in her poem, A King Of Swing:
A KING OF SWING
It's all the new thing,
They said of that swing;
It was a whole lot of jazz,
But with an added pizzazz.
A Count and a Duke
Made the big bands sing;
But from the Southland,
There came a new King.
James Melvin Lunceford entered,
Onto the world stage
And his bold, lively rhythms
Became all the rage.
With grand spectacle, showmanship, humor,
And a flashy, unique style;
He led his ensembles ,
With a dazzling smile.
Born in a Mississippi hill town,
And ascending to great fame;
His renowned Lunceford two-beat
Would forever cement his name. 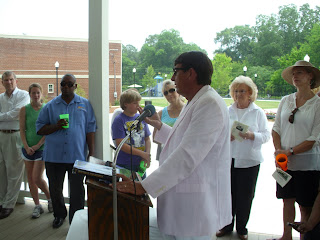 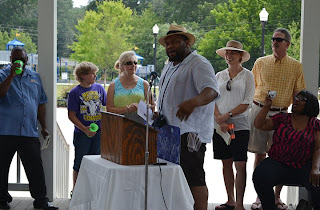 I, Tha Artivist, humbly gave my off the cuff remarks and perspective of Jimmie Lunceford’s rich legacy as it pertains to its seminal importance in the Memphis Music Heritage continuum as well as touched upon his exceptional huemanitarian and philanthropic efforts…I first shared with the audience how I changed Jimmie Lunceford’s birthplace from Fulton, Missouri to the correct Fulton, Mississippi which met with a loud round of cheers of approval I guess you can say that Pres. Obama isn’t the only person with birthplace issues…I also chimed me that in spite of Mississippi’s rough past that the state in my humble opinion probably produced more geniuses than any state in the union which also met the approval of the audience…I also shared with them the picture I created in honor of Lunceford’s legacy and for the special occasion entitled “The Lunceford Way” which of course I have autographed prints available for purchase…Overall the presentation was received with both great applause, appreciation and laughs… 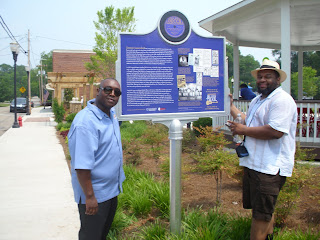 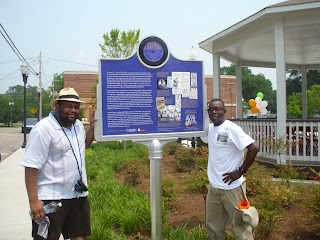 My friend and contact person on this project, Bro. Shawn Green, did a masterful job of emceeing this historic occasion... 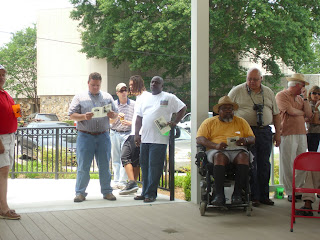 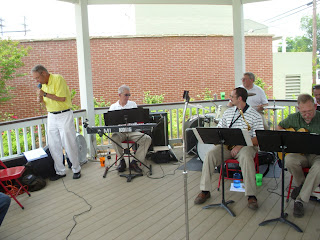 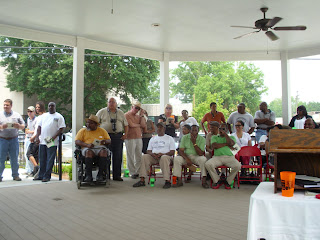 Once again, I would like to thank the good folks of Fulton in Itawamba County,MS, for allowing me the privilege of sharing in the celebration of their famous native son Jimmie Lunceford's Mississippi Blues Trail Marker Ceremony on June 4, 2011...Yall Truly Made A Stranger Feel Like Family...Jimmie Lunceford Still Bringing Folks Together For A Beautiful Cause In Death As He Did In Life...Long Live The King Of Sonic Swing! One ♥! 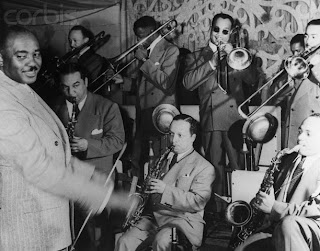 Jimmie Lunceford was the first Memphis City Schools high school band director and started music education in The Memphis City Schools back in the 1920s. He was not even hired to be a music instructor but yet believed in the power of music to change lives and wanted to share his passions with young people...
Jimmie Lunceford, even more so than W.C. Handy, is the reason why Memphis is truly renowned for its musical heritage because he singlehandedly started music education in The Memphis Public Schools system without any money from the school system and also was the first to teach jazz studies in the school system back in the 1920s...


His band formed by his students, @ first known as The Chickensaw Syncopators, were very popular locally and was also heard on local radio…In 1930, He took his band, composed of his best high school students and buddies from Fisk University, left Memphis and became the house band at the famous Cotton Club...His orchestra was also the number one attraction at the legendary Apollo Theatre for a decade and was known as the Harlem Express, the number one band of choice for African Americans in the nation during the 1930S and the 1940S...He Was Known As The King Of The Battle Of The Bands Because His Orchestra Would Constantly Beat Those Lead By Count Basie, Duke Ellington, Benny Goodman and Glenn Miller in popularity contests and cut throat competition...

His songs were heavily featured in popular cartoons of the era and the Lunceford Orchestra even made a cameo appearance in “Blues In The Night” (1941), one of the most popular musicals of that era…
Jimmie Lunceford was a beast, a music revolutionary in terms of pure showmanship way ahead of its time his orchestra was made for tv!!!! Jimmie Lunceford's Orchestra was the greatest show on earth, nobody's band including Duke's surpassed him in showmanship and presentation...Everybody from Glenn Miller, Jimmy Dorsey to Count Basie wanted both his sound and his look...

Although  Jimmie Lunceford was a phenomenal athlete who  excelled in track, football, baseball, basketball and was a golden gloves boxer, his true passion was empowering folks through the gift of his music abilities…Being a social worker he thought that music could change and save lives…He saw himself as a music Johnny Appleseed planting this love throughout the country by starting music education programs for youths…

Lunceford was well respected among his men and he also never cuss, drink or gamble…However, he had a passion or fetish for planes…Him and his beautiful wife Crystal Tulli Lunceford were experienced pilots and owned several air planes which was a rare exception considering that many African Americans were not allowed to attend flight schools in the U.S.…
He also wanted to start a retirement community for older musicians before he died under mysterious circumstances while signing autographs before a concert in Seaside Oregon on July 12, 1947 @ the age of 45…Some folks including his band members believed that he was poisoned by a racist restaurant owner who at first refused to serve Jimmie and his Orchestra…Even some of the other band members became sick that evening as well…

Thanks so much for your dedication in keeping Jimmie Lunceford's legacy alive. We appreciate you sharing your vast knowledge of this gift musician.